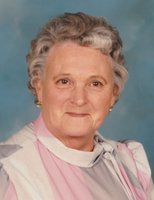 MacAskill – Effie Mildred “Midge” (Bruce) MacAskill, of Kennetcook. On Sunday, February 4, 2018, our dear mother Midge MacAskill passed away at Colchester East Hants Health Centre, Truro, in her 98th year. Born in West Gore on November 29, 1920, she was the last immediate surviving member of the large family of James William and Melvina (Prest) Bruce of West Gore. Our mother dedicated her life to the care and nurture of her family. She was a kind and gentle woman who believed her family was “the best”, and loved the huge Bruce and MacAskill family gatherings. She worked as the secretary for her family business, J. F. MacAskill Lumber, and was active in the Kennetcook United Church and the UCW, and was a CGIT leader. She is survived by her children, Dawn (Bob), Barry (Catherine), and Judy; her grandchildren Angie, Scott, and Sally, and her great-grandsons, Brandon, Jack, and Josh. We will miss her always. Besides her parents, she was predeceased by her beloved husband, James Freeman MacAskill; her adored grandson James William “Jamie” MacAskill in 2007; her Bruce siblings, Lloyd, Phillip “Ted”, Leona, Jean, Douglas, Nettie, Nellie, Graham, Aubrey, Blair, Gerald, and Donald; as well as her husband’s MacAskill siblings. Visitation will be held on Friday, February 9 from 7-9pm at J. Wilson Allen Funeral Home, Kennetcook. A funeral service will be held on Saturday, February 10 at 2pm at Kennetcook United Church, Rev. Natalie Buchanan-Rutherford officiating, with interment in the Kennetcook Cemetery and a reception to follow. Special thanks to Dr. MacLean and the VON care workers and nurses, as well as the Kennetcook Fire Department and ambulance attendants for all the call outs over the years. Family flowers only; donations may be made to the Kennetcook Cemetery Society c/o Barry MacAskill, 6098 Hwy 354, Kennetcook, B0N 1P0. Arrangements have been entrusted to the compassionate care of the J. Wilson Allen Funeral Home, Hwy 354, Kennetcook, ph-1-902-362-2440 or please visit our website at www.allenfh.ca to sign the guest book and send private condolences.

The Lord came down and touched her face,

Held her hand and whispered low,

Come with me, it's time to go,

The gates of Heaven opened wide

And the angels lined up side by side

A special gift was on her way

The day God took my mother away.