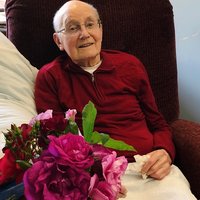 BRISON - Clifford Raymond, age 96, Cheverie, passed away peacefully with his family by his side on January 6, 2020 at Haliburton Place, Windsor, where he had resided and received excellent care for three years. Born in Cheverie on October 8, 1923, he was the son of the late Frederick and Margaret (Weatherbee) Brison. One of ten children, growing up in the Great Depression instilled in him a lifelong appreciation of hard work and a love of family and community; both were constant throughout Dad’s life. His work life spanned from 1938 to 2006, working at his father's pulpwood business, then for CIBC, before running C. R. Brison General Merchants with his hard-working wife Verna by his side, selling everything from fresh meat to the first televisions on the Shore until the store’s sale in 1969 due to Dad’s health issues. Upon his recovery, he began a new career as a stock broker with investment firms including Burns Fry, J.D. Mack, and Acadian Securities. He was loved by clients and colleagues who stayed in touch even beyond his retirement at age 82. He loved children, dogs, horses, baseball, hockey (especially the Montreal Canadiens), boxing, politics, classic country music, and dancing - hot polkas were his favorite. His love of young people and passion for sports led him to coach and sponsor the Cheverie Cardinals and the Shore Maroons. A proud Mason and member of the Shore Lodge for over 60 years, Dad was also an enthusiastic and effective fundraiser for the Cheverie United Church, and in 2012 was awarded the Queen Elizabeth II Diamond Jubilee Medal for his volunteer work and community contributions on the Shore. After retiring at 82, Dad took on the greatest vocation of his life as Mom’s caregiver when she was stricken with Alzheimer’s. Dad never lost his optimism, facing challenges in health and business fearlessly, happily, and without complaint, always maintaining his sense of humour and fun. We were lucky to have him in our lives. He will be dearly missed by his children, Frances Brison, Wolfville, Phil Brison (Brenda), Upper Burlington, Mitchell Brison (Anna), Falmouth, Scott Brison (Maxime St-Pierre), Cheverie; grandchildren, Jennifer Nicholls (Jeremy Higgins), John-Devon Nicholls, Kara Brison, Jocelyn Brison, Hannah Brison, Matthew Brison, Seth Brison, Claire Brison-St. Pierre, and Rose Brison-St. Pierre; great-grandson Sam Nicholls; sister Maudie, and many nieces and nephews. Besides his parents, Clifford was predeceased by his loving wife of 66 years, Verna (Salter); sisters, Elsie, Lucy, Edith, Beatrice, and Jean; and brothers, George, Laurence, and Wesley. Cremation has taken place; visitation will be held on Thursday, January 9 from 7-9pm at J. Wilson Allen Funeral Home, Summerville, with a memorial service on Saturday, January 11 at 2pm at the Cheverie United Church, Rev. Bill Gibson officiating. Private interment in Cheverie United Church Cemetery following the service, with a reception at the Summerville Fire Hall. Donations in memory of Clifford may be made to the Cheverie United Church c/o Arlene Newhook, 5543 Hwy 215, Kempt Shore, RR1 Newport B0N2A0 or Haliburton Place Recreation Fund, 89 Payzant Dr, Windsor, NS B0N 2T0. Arrangements have been entrusted to the compassionate care of J. Wilson Allen Funeral Home, Hwy 215, Summerville, ph-1-902-633-2431 or please visit our web site at www.allenfh.ca to sign the guest book or send private condolences.