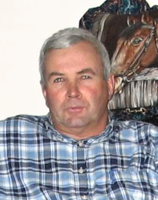 White, Merlin Terry – 67 of Noel Road passed away at his home on January 14th, 2021 after a six-year war against cancer. Born on May 6th, 1953 in Noel Road, he was the only son of Tom and Kathleen (White) White. Throughout his life, Merlin was highly active in his community. For several years he was a Boy Scout leader who provided many trips, camp experiences and values for the boys in his troop. Merlin was also active in baseball, coaching teams and building the ballfield on Colbert Road. His years in baseball earned him a place in the East Hants Sports Hall of Fame. In winter, snowmobiling was his sport. He played a leading role in developing and maintaining many trails in the area. He thoroughly enjoyed driving the groomers and was an active member of the Driftclimbers club. After graduating from high school, Merlin went directly into the work force. He worked for the same company until he retired a few weeks ago. He was a dedicated, reliable worker for 49 years 3 months and 14 days. Merlin is survived by his family Kendall (Kara), Kirkland and Kaelum, sisters Estelle (David) Brown, Cora (Glen) Martin, Grace (Gary) Beattie, Minnie (Wayne) McLoud, Lona (Kevin Tufts) and many nieces and nephews. Besides his parents, Merlin is predeceased by his youngest sister Jackie. The family would like to extend a heartful “thank you” to the many VON nurses, Palliative Care, Dawn Ross, Dr. Smith, Dr. Michelle MacLean, the doctors and nurses at the Colchester East Hants Health Centre for their excellent compassionate care. A celebration of Life will be held at a later date. A private family burial will be held in the St. James Presbyterian Cemetery at a later date. Donations in memory of Merlin can be made to the Colchester East Hants Health Centre, Hants North Ball Association or the Driftclimbers Snowmobile club. Arrangements have been entrusted to the compassionate care of the J. Wilson Allen Funeral Home, Hwy 354, Kennetcook, ph-1-902-362-2440 or please visit our web site at www.allenfh.ca to sign the guest book and send private condolences.