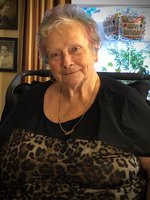 Cunningham, Carol Ann, CD Cunningham, Carol Ann, CD, age 80 of Falmouth formerly of Toronto, ON died peacefully on April 14th, 2021, with family at her side in the Windsor Elms Village, Falmouth, NS. Born in Toronto, ON, January 12th, 1941, she was the eldest daughter of the late Allan and Margaret (Evans) Cunningham. Carol worked for the Canadian Corps of Commissionaires for over 20 years before retiring to NS in 2001 to be closer to her sister and family. In 1961, Carol enlisted in the Canadian Women’s Army Corp (CWAC), serving in the 2nd Toronto Service Battalion 26 Medical Corp, 4th Ordnance Corps, RCEME, Military Police, Toronto Scottish Regiment, 2nd Battalion Queen’s Own Rifles of Canada. Carol was a retired Warrant Officer with 26 years of service. Carol worked part time as concert hall security for Massey Hall, Toronto, taking in many great concerts and productions. She involved herself in organizations both in Toronto, ON and Windsor, NS. She was a member of the Royal Canadian Legion for over 45 years. Notably she was one of the first ladies to drive in Powder Puff Stock Car Races in Toronto. She is survived by her biological son Paul (Nancy) Schaefer, their daughter Amanda, Bayfield, ON, sister Susan “Susie” (Gary) Cochrane, Sweets Corner, nephew Jason Cochrane (Becky), Brooklyn, nieces Andrea (Pete) Rose, Ketch Harbour, Carolyn (Brett) Hazel, Greenhill, Laura Cochrane (Trevor), Gypsum Mines, great nieces and nephews Brea, Chad, Grayson, Amelia and Eli, cousins Peter (Debbie) Evans, Etobicoke, ON and Ric (Laura) Evans, Toronto, ON. Besides her parents, Carol was predeceased by her uncle and aunt Richard and Georgina Evans, and a brother in infancy. The family would like to thank staff and volunteers at Kendall Lane Housing, Dykeland Lodge and Windsor Elms Village. A special thanks to the staff that worked Fundyview House 1 for all of their care and compassion during Carol’s stay. We would also like to thank Dr. Amanda MacDonald and Dr. Amy MacDonald. Cremation has taken place under the direction of J.W. Allen Funeral Home Ltd. There will be no visitation or funeral service by request. In lieu of flowers donations in memory of Carol can be made to the Royal Canadian Legion Branch No. 9, 35 Empire Lane, Windsor, NS, B0N 2T0. Arrangements have been entrusted to the compassionate care of the J. Wilson Allen Funeral Home, 4646 Hwy 215, Summerville, ph-1-902-633-2431 or please visit our web site at www.allenfh.ca to sign the guest book and send private condolences.