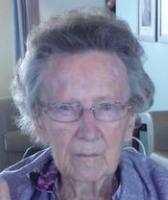 Ethel (Wilcox) MacAskill It is with a sense of deep sadness as we face our loss, but with a deeper sense of gratitude for the gift of having shared life with our mother, the family of the Ethel (Wilcox) MacAskill announce her peaceful passing on November 16, 2013 in the loving atmosphere of Northwood Centre, where she has resided for the last eleven months. Ethel was born in 1923 in Lowell, Mass., USA, and was the daughter of the late Fred and Grace (Vaughan) Wilcox. She moved during the Depression at the age of seven to Cheverie, Hants Co., NS. Where she went to school in Cheverie and then on to Windsor Academy for grades 11 and 12 (1942). She graduated from Normal College 1943 and taught school for 22 years in Belmont, Martock, and Kennetcook. It was in Kennetcook in 1946 that she met Dad when he returned from the war. They married in 1947. She leaves to mourn her children, David and Barb, Somerset, Rev. Lorraine, Dartmouth, Rodney and Barb, Dartmouth; her grandchildren, Michael and Barb MacAskill, Ken and Kim Gillies; her great-grandchildren Ryan and Liam Gillies; brothers Prescott, Ontario, Ted and Joan Wilcox, New Minas; sisters-in-law Mildred MacAskill, Kennetcook, Effie (Robert) Skalitzky, WI, USA, Shirley MacAskill, New Ross; brother-in-law Gerald Cooper, Toronto. Besides her parents she was predeceased by her beloved son-in-law, Randy Sheppard (Lorraine's husband), her sisters Winnifred (Eric) Geitzler, Elinor (Charles) Burke, and Greta Wilcox. At 11am on Tuesday, November 19, in a graveside service in the Kennetcook cemetery, Ethel will be laid to rest beside her loving husband of 61 years, Murray Arthur MacAskill, who predeceased her in 2008. Officiating will be the Rev. Catherine MacDonald, a granddaughter of Dad's late sister Annie. All family and friends are welcomed. In case of inclement weather, the service will be held at J. Wilson Allen Funeral Home, 6571 Hwy 354, Kennetcook. There will be a celebration of Ethel's life for all to attend at Northwood Centre in the near future. If you wish to make a memorial donation, please consider doing so to: Parkinsons Maritime Society, 150-7071 Bayers Road, Halifax, NS, B3L 2C2 or donations in Ethel's name to Northwood Foundation, 130 Eileen Stubbs Ave., Dartmouth, NS B3B 2C4. Arrangements have been entrusted to the compassionate care of the J. Wilson Allen Funeral Home, Hwy 354 Kennetcook, Ph-1-902-362-2440 or please visit our web site at www.allenfh.ca to sign the guest book or send private condolences