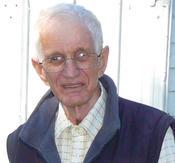 Reginald Corey Everett Clark-88,Dykeland Lodge,formerly of Walton, passed away on December 1st 2013 in Dykeland Lodge. Born June 4 1925 in Walton, he was a son of the late Henry and Leona (Bezanson) Clark .Reg was a carpenter by trade and enjoyed model ship building. Many of his ships he created himself are held in the Maritime Museum of the Atlantic in Halifax.He was a prominent citizen and historian of the community, an active member of the Grace United Church in Walton where he served as a steward and secretary of the Grace United Church Cemetery for many years.He was an outstanding member of the Odd Fellows Association.Reg and the late Ted Burgess was very instrumental in restoring and preserving the Walton Lighthouse as a Historical Landmark. He will be dearly missed by all that knew him. He is survived by cousins Elizabeth Rae Clark and Margaret Clark both of Halifax, Barbara Swinamer Riverview N.B. and several other cousins. He was predeseased by his sister Joy and cousin Verna Mollins. Thanks to Norma, Peter,Lorna,Stephen and the late Ted Burgess for their care and attention over the years towards Reg.Cremation has taken place with no visitation by request. A memorial service will be held Wednesday December 4th at 2 P.M. in the Grace United Church in Walton. Buriel in the Grace United Church Cemetery, Walton and reception to follow in the church hall. Donations to the Grace United Church or the Walton Lighthouse. Arrangements have been entrusted to compassionate care of the J Wilson Allen Funeral home, Summerville phone 902-633-2431 or please visit our website at www.allenfh.ca to sign the guest book or send private condolences.