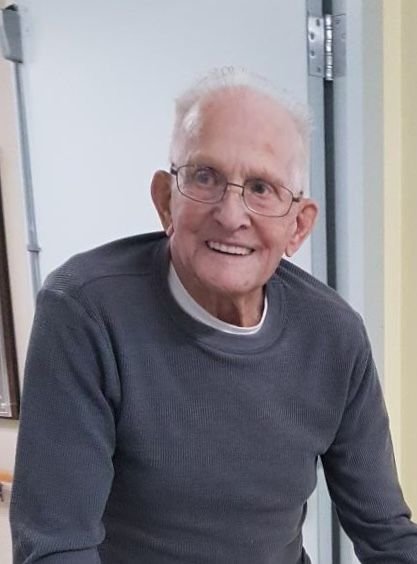 LAKE, ALTON PERRY, 93, of East Walton passed away peacefully on April 16, 2019, in Dykeland Lodge, Windsor. Born May 28, 1925 in East Walton, he was the son of the late Trenholm & Dorothy (Thorpe) Lake and also predeceased by his siblings Walter, Ted, Milton and Ada.

Alton spent his early years working in the Barite Mine in Walton. During his time there he was involved in an accident which left him badly broken and paralyzed for a period of time. Against all odds he returned to work, this time with a chain saw in the woods. Besides a few years of travelling to the city doing carpentry work, he ended his working years cutting wood.

His love of farming was evident early on. At one point he tended to over 100 head of beef cattle, while travelling the shore for hay fields to cut. The later years you would see him in his garden, which he was very proud of. He would ask his granddaughters each year to take pictures so  that he could show whoever visited. He would always say his garden was earliest to produce, was the biggest and best around.

Cremation has taken place and at Alton’s request there will be no visitation or service. A private family burial will take place at a later date.

In lue of flowers, donations can be made to the Tennecape Perpetual Care or the Walton Shore Fire Dept.

Arrangements have been entrusted to the compassionate care of the J Wilson Allen Funeral Home HWY 215 Summerville, ph- 1-902-633-2431 or please visit our website at www.allenfh.ca to sign the guest book and send private condolences.

To plant a tree in memory of Alton Lake, please visit Tribute Store

Donations can be made to the Tennecape Perpetual Care or the Walton Shore Fire Dept.

Share Your Memory of
Alton
Upload Your Memory View All Memories
Be the first to upload a memory!
Share A Memory
Plant a Tree