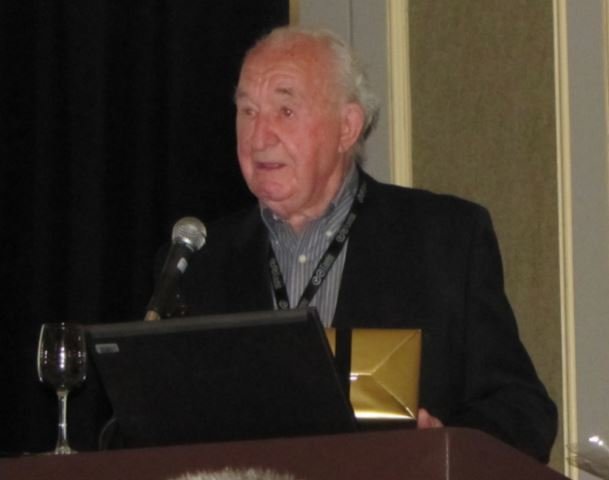 Ralph Douglas “Doug” Corkum, age 89, of Falmouth, passed away suddenly at home on May 14, 2018. Born on October 21st, 1928 to the late Clifford and Clara Corkum in Springhill Nova Scotia, Doug was an interesting person to say the least. He was adored by his friends, family and those who had the pleasure of meeting him and his “charming” personality. Doug held within him a strong entrepreneurial spirit that he demonstrated from a young age, owning his first business, La Have dry cleaning, at age 27. Later on in the 1960s Doug sold his dry cleaning business and entered into the world of fast food, partnering with A&W and opening two of his own chain restaurants. Eventually, Doug sold all his businesses and began working with a number of housing authorities with the goal of providing low-income families with affordable housing. During the 1980’s Doug was approached by the City of Halifax to become  the Executive Director of the Halifax Industrial Commission in pursuit of creating an industrial park, with the finished product being what we now know as Bayers Lake and Ragged Lake industrial parks. While continuing his work on the industrial parks, Doug and his wife Suzanne moved their family to Falmouth Nova Scotia. However, they weren’t content with just living in a rural area, so they began pursuing a lifelong dream of farming. By following their passion in farming and the wine industry, they became pioneers in Nova Scotia’s wine industry and their efforts to develop the industry were recognized on multiple occasions. They planted the vineyard in the early 1980s and opened the Sainte Famille winery in 1990. Most would recognize my Grandfather as the loud old man from the Halifax Farmers Market. He was a hard-worker and had a very outgoing personality. I am very proud to be able to call Doug, an innovative entrepreneur who achieved so much in his life, my Grandfather. He could always make you laugh; those who knew him well knew that something was wrong when he said he was doing well, as he always answered “How are you?” with “terrible.” Doug and his antics will be missed by all. Doug is survived by his wife, Suzanne Corkum; sons Michael Corkum and Troy Derbyshire; daughters Tracy Lake (Bobbie) and Monique Gray (Darby); 8 grandchildren and 6 great-grandchildren. Besides his parents, he was predeceased by his sisters Lorraine Harritt and Glad Morash, brother Roy Corkum, daughter Patti Kim and daughter-in-law Judith Corkum. At Grandad’s request, his body has been cremated and there will be no funeral service.  There will be a Celebration of his Life at a later date in the summer when the vineyard is at its finest.

By: Riley Gray, age 15 and Granddaughter of Douglas Corkum.

Arrangements have been entrusted to the compassionate care of the J. Wilson Allen Funeral Home, Hwy 215, Summerville, ph-1-902-633-2431 or please visit our website at www.allenfh.ca to sign the guest book or send private condolences.

Share Your Memory of
Ralph "Doug"
Upload Your Memory View All Memories
Be the first to upload a memory!
Share A Memory
Plant a Tree