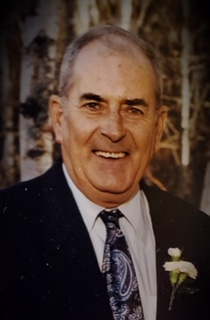 Please share a memory of Ron to include in a keepsake book for family and friends.
View Tribute Book
Tucker, Ronald George-84 of Lower Burlington, Hants Co., passed away Tuesday June 9 at Haliburton Place in Windsor, N.S. Born on December 7, 1935 in Lower Burlington, he was the son of the late George and Bertha (Dodge) Tucker. Ron was a painter by trade for many years and belonged to the militia in Halifax in his younger years. He was a great fan of sports, played baseball and coached for the Burlington Team for several years. His favourite teams were the Toronto Blue Jays and the Toronto Maple Leafs; he could tell you every players name on both teams. Ron was well known by many folks he met during his career as a painter and just by being an outgoing likeable guy. He was a lover of all his dogs; Bandit, Toby, Duke and Bootsie. Ron is survived by his daughters Trudy (Eric) Perkins, Wendy Lewis and grandson Loran Wilson, also several nieces, nephews and cousins. Besides his parents Ron is predeceased by his wife Shirley (Barkhouse) Tucker, and brother Philip Robert Tucker. Many thanks to all the staff at the Haliburton Place in Windsor for the greatest of care; and thanks to Dr Wile and all the nurses who looked after Ron. A private graveside committal service will be held at the Riverside Cemetery in Lower Burlington for immediate family only. Donations in memory of Ron can be made to the Haliburton Place – 89 Payzant Drive, Windsor, NS B0N2T0 or the SPCA – novascotiaspca.ca -donate. Arrangements have been entrusted to the compassionate care of the J. Wilson Allen Funeral Home, Hwy 215, Summerville, N.S. phone 1-902-633-2431 or please visit our web site at www.allenfh.ca to sign the guest book and send private condolences.
To plant a beautiful memorial tree in memory of Ron Tucker, please visit our Tree Store

Donations in memory of Ron can be made to the Haliburton Place – 89 Payzant Drive, Windsor, NS B0N2T0 or the SPCA – novascotiaspca.ca -donate.
Online Memory & Photo Sharing Event
Online Event
About this Event

Share Your Memory of
Ron
Upload Your Memory View All Memories
Be the first to upload a memory!
Share A Memory
Plant a Tree