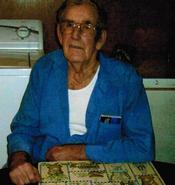 Please share a memory of Clarence to include in a keepsake book for family and friends.
View Tribute Book
Clarence Edward McKenzie- 84,Dykeland Lodge Windsor, formally of Cogmagun, passed away on August 18, 2012 in Hants Community Hospital Windsor. Born in Cogmagun, he was the son of the late John and Hazel ( Reynolds) McKenzie. Clarence worked in the woods in his early years and then for Maritime Builders Ltd and then worked for the Annapolis Valley School Board retiring in 1992. Clarence enjoyed his refreshments with a good smoke and also loved to work in his vegetable garden and cutting wood. He is survived by his sons Stephen ( Shelley), Cogmagun, Kenny, Halifax, Kevin, Middle Sackville, grandchildren Matthew (Tierza) Obrien, Steve (Elizabeth) McKenzie, Edward , Desiree and Candace McKenzie, two great grandchildren Landon McKenzie, Hunter O'Brien. Sister Florence Thomas, and brother Stanley McKenzie Scotch Village and many nieces and nephews. Besides his parents he was predeceased by sisters Helen and Doris and brothers Cecil, Robert, Allen, Donnie and Chester in infancy. Cremation has taken place with no visitation by request. A memorial service will be held Tuesday August 21,2012 at 2 pm in the J.Wilson Allen funeral home Hwy 215 Summerville. Rev. Debbie Mosher officiating with interment in Sandyland Cemetery, Walton Woods Road. Family flowers only, donations in memory can be made to Sandyland Cemetery or Dykeland Lodge. Arrangements have been entrusted to the compassionate care of the J Wilson Allen Funeral home, 4646 Hwy 215 Summerville, phone 902-633-2431 or visit our web site at www.allenfh.ca To sign the guest book or send condolences
To plant a beautiful memorial tree in memory of Clarence McKenzie, please visit our Tree Store

A Memorial Tree was planted for Clarence
We are deeply sorry for your loss ~ the staff at J. Wilson Allen Funeral Home
Join in honoring their life - plant a memorial tree
Services for Clarence McKenzie
There are no events scheduled. You can still show your support by planting a tree in memory of Clarence McKenzie.
Plant a tree in memory of Clarence
Print
Online Memory & Photo Sharing Event
Online Event
About this Event